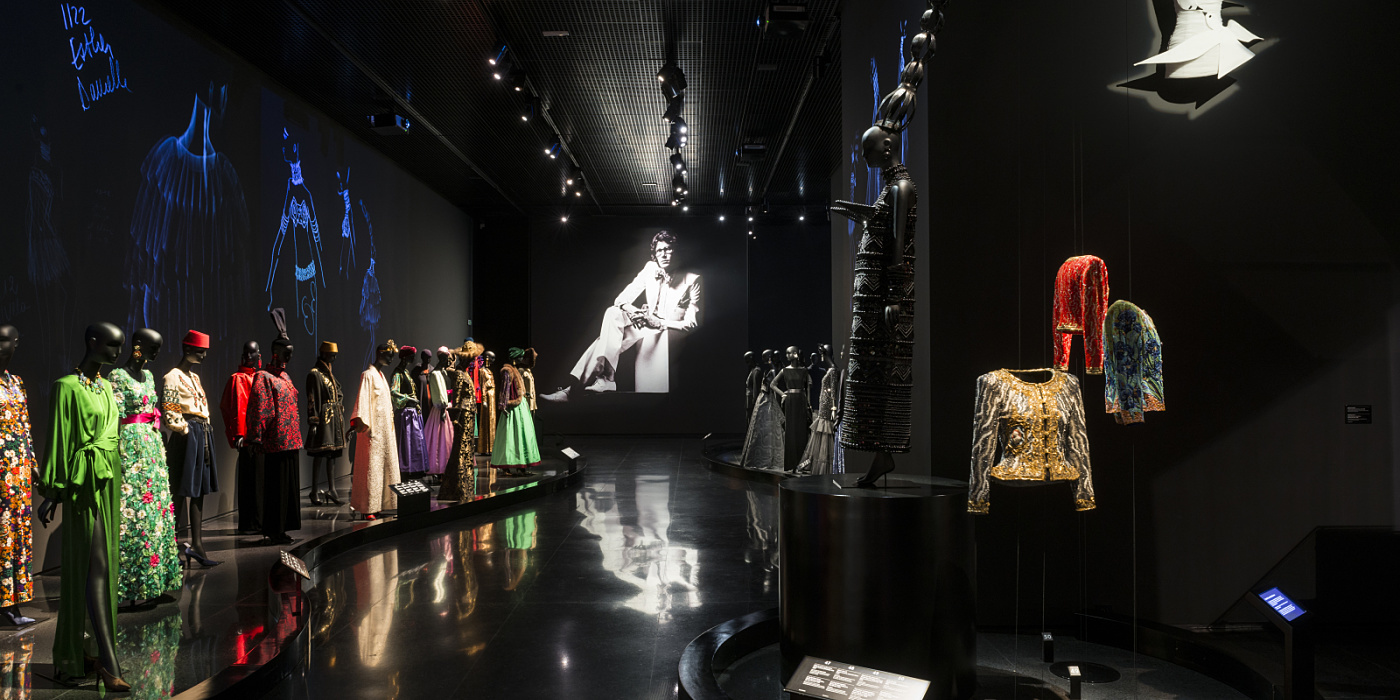 Marrakech’s best museums are small, intimate and often housed in wonderful old mansions. Plus, they’re usually much less crowded than the city’s big sights. They don’t demand an entire morning or afternoon of your time, but are rather places to pop into while touring the Medina or the downtown Ville Nouvelle. At most of them, friendly staff is on hand to answer questions and even show you around.

Just around the corner from the Majorelle Gardens is a museum dedicated to the man who saved it from the bulldozers, Algerian-born French fashion designer Yves Saint Laurent. The museum is a homage to “YSL”,  who bought and restored the garden, spending much of his time in the city, along with his partner Pierre Bergé.. The museum is housed in a brand-new, specially constructed building with a textured brickwork exterior. It kicks off with a starter exhibition of photographs and artworks before plunging into the main course of fashion design. The main exhibition space features prototypes from some of YSL’s most famous creations. There is also a film about Saint Laurent and his work, as well as temporary exhibitions, a library, bookshop and café.

For centuries, Marrakech was the northern terminus for a rich trade across the desert with Timbuktu, Mali and Ghana. Musée Tiskiwin documents the city’s place in the trans-Saharan caravan trade and its accompanying cultural connections. Crossing the Sahara was a far more hazardous undertaking than crossing the Mediterranean. But it was the cross-desert trade in salt, gold, ivory, Moroccan leather, that made the city rich. The museum started life as the private collection of Dutch anthropologist Bert Flint, who has spent his life studying Marrakech’s links with West Africa. Here  you’ll see a vast collection of camel saddles, tents, sculptures, costumes and adornments illustrating the trade, desert life and Marrakech’s West African connections. English-speaking visitors are provided with a booklet which explains all of the exhibits.

Here you can glimpse the Marrakech and Morocco of times gone by through an amazing collection of photographs, all taken between 1870 and 1960. With over 4,500 shots, many printed from glass negatives made by pioneers of Moroccan photography, the museum has far too many images to show at any one time, but rotates them in exhibitions that change regularly, focusing on particular aspects of the city and of Morocco more widely. Many of the photos show aspects of street life over the decades, or cover the history of locations such as the Jemaa el-Fnaa.

The Musée Mohammed VI pour la Civilisation de l’Eau (Mohammed VI Water Museum), named in honour of Morocco’s king, is dedicated to the science and beauty of hydrology. Located out of town in the Palmeraie. The museum is large, modern and still largely undiscovered. It is, however, well worth the effort of getting to. Child-friendly, with lots of touch screens, the museum illustrates the history of hydraulic engineering in Morocco from the Middle Ages to the present. Indeed, it is a little-known fact that Morocco pioneered irrigation techniques, using water channels from the High Atlas mountains to bring water to all of the city’s ancient orchards, including the Menara and Agdal gardens.

Part of the cultural Atlas Golf Center of Marrakech, the observatory proposes a special program for amateur scientists of the earth and the sky. Observe the stars of Marrakech, try to find every constellation and enjoy a peaceful moment.

Located within the Majorelle Garden, this museum has an outstanding collection of Amazigh ceramics, textiles and jewelry. Another space is devoted to the works of Jacques Majorelle, creator of the garden, and the personal Berber collection of Pierre Bergé and Yves Saint Laurent.

A few twisty alleyways behind Palais Bahia, this museum is housed in another opulent palace. Dedicated to the region’s arts and crafts – both past and present – the museum’s displays include daggers, ceramics, leatherwork and elegant robes worn by emperors.

For the art and culture lovers, the museum promotes African contemporary art from Morocco and neighbouring countries. The museum’s collection is composed of digital arts, contemporary paintings and sculptures, and videos of cultural development in Morocco.

Housed in the Dar Menebhi Palace, built at the end of the 19th century, this museum brings together traditional and modern Moroccan art, including fine examples of historical books, coins and pottery of Moroccan Jewish, Arab and Berber cultures.

This temple of culture opens the doors to discover the history of Morocco through its heritage craft, but also through works of Orientalist painters. This museum gives insight into the mysteries of Orient.

Discover the world of the perfumes creation through a collection of rare objects. The museum proposes an educational program to learn the secret life of plants, while introducing visitors to the art of perfumery. This is the ultimate sensory and cultural experience in Marrakech.

The exhibitions at the Musée des Confluences are usually very interesting, but the star of the show is the building itself. The museum’s rather vague title (“Museum of Convergences”) reflects the fact that it doesn’t actually have a specific theme or even a permanent collection, but houses a succession of temporary displays on different subjects. Past exhibitions have included the shared culture of the Abrahamic religions and the magnificence of Marrakech’s palaces. Indeed, of those palaces, this very building is among the most magnificent of all. It was built in the 1920s for the despotic Thami el Glaoui, who was Pasha of Marrakech during the colonial period, and no expense was spared in its construction. Glaoui threw lavish parties here, attended by the likes of Winston Churchill, and the beautiful tile work, stucco and carved cedarwood is among the finest in all Morocco.