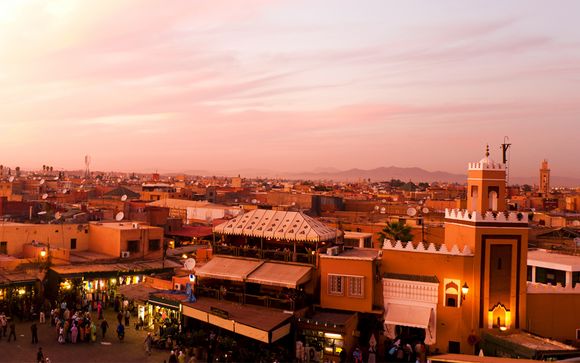 Surrounded by a vast palm grove, the medina in Marrakech is called the “red city” because of its buildings and ramparts of beaten clay, which were built during the residence of the Almohads. The heart of the medina is Jamaa el-Fna square, a vibrant marketplace. Nearby is the 12th-century Kutubiyyah (Koutoubia) Mosque with its 253-foot (77-metre) minaret, built by Spanish captives. The 16th-century Saʿdī Mausoleum, the 18th-century Dar el-Beïda Palace (now a hospital), and the 19th-century Bahia royal residence reflect the city’s historical growth. Much of the medina is still surrounded by 12th-century walls; among the surviving gates to the medina, the stone Bab Agnaou is particularly notable. The modern quarter, called Gueliz, to the west of the medina developed under the French protectorate.

Marrakech is known for its parks, especially the Menara olive grove and the walled 1,000-acre (405-hectare) Agdal gardens. An irrigation system built under the Almoravids is still used to water the city’s gardens. Also Famous for it’s high end and luxurious properties, that varies from villas Marrakech for sale, apartment in Marrakech for rent it sure satisfy the taste of everybody checkout our website for more details : https://www.marrakechsunset.com/

Painted entirely in an enchanting salmon pink, Marrakesh is fondly referred to as the “Rose City” or “Red City” by thousands of cultural pilgrims who fervently scout its lanes. Marrakesh, the jewel of Morocco, has been the epicenter of culture and trade for ages.

Its inviting pink walls, alleys and palaces have, over time, provided a calm and restive center for both tourists and residents. A thriving and pulsating traditional undertone holds the city together, despite the onslaught of thousands of tourists month after month.

Exotic wares, reminiscent of a bygone era, still line the streets as tradesmen shout out to excited tourists who lose themselves to the rose-tinted hues of the city. The pink city, or “Al Hamra” in local parlance, tantalizes its visitors with a heady mix of bohemian high culture and the rural earthiness of the villages. Inquisitive eyes stare out of the finely-crafted faded red and ochre walls as the story of this mystical land unfolds down the narrow alleys that one can only walk through.

The confluence of perhaps the most exotic cultures in the world exist right here in this pink city. Arabian, African, and European influences are found in the streets, its inhabitants, and its monuments.

Famous around the world for its market places, otherwise known as Souks, Marrakesh is nestled like an enchanting pink gem at the base of the spectacular Atlas Mountains. Adding to the mystical allure of the city are the taut tradesmen and craftsmen on the street who entertain and invite curious visitors.

The city preserves the remnants of a bygone era in maintaining and adding to the aesthetic glory of a forgotten time, starting with the 16 km red wall that surrounds the city. This wall was perhaps an invitation to the millions that used this city as a resting place in the first half of the century, or the visitors that throng to discover its beauty today.

While first impressions paint the city in a chaotic pink haze, it takes a little walk down to the city square to be able to achieve the rose-tinted view of this city. Snake charmers, hawkers, and musicians line the street, adding to the old world charm of Marrakesh.

The color of the city doesn’t come from some deep-seated philosophy, but rather from the simplest of materials of architecture — Red Earth. The city, initially a fortress and a symbol of power, constructed during the Almovirades reign, gradually grew. Fantastical squares, towering minarets, gardens, monuments, and forts were added, and they all followed one underlying design principle — Tabia. Tabia is a mix of red mud and water from the Hazou plains.

Not just in the form of its monuments alone, but also in terms of their mannerisms and attire, the people of Marrakesh have held on to and preserved the forgotten centuries. Despite rapid modernization around the city, one finds Marrakesh a welcome oasis from the fast-paced world of technology. Of course, this comes with its fair share of surprises, too.

Known for its market places and the exotic sights, sounds, and smells, Marrakesh has also steadily earned the reputation of being home to some of the most ruthless shopkeepers on earth. A keen eye for detail and a steady hand on your purse should keep your rose-tinted view pink and glorious.

A hospitable people otherwise, the people of Marrakesh are keenly aware of the exotic appeal their city holds to millions around the world and they don’t shy away from maximizing it. Colorful and often grand costumes are a gimmick and, perhaps, even a way of life. The veiled women, too, indulge in the colors of life, wearing pink, yellow, and purple, amongst other fascinating colors.

The kaleidoscopic spectrum of culture, tradition, and beliefs that Marrakesh brings forth always succeeds in mesmerizing its visitors. The green date palms, reddish ochre walls, and intense blue sky light up a stage for its residents as they dance to the chaotic rhythm of life dressed in the vibrancy of their beliefs and history.

The city has changed over the years from being the opulent and welcoming paradise to an industrious market place. But the spirit and the outlook of its people are still grand and festive. A journey into the city takes you back into time as you scout its numerous alleys, always guided by the red and ochre homes and walls that will lead you home.

The city of romance, mysticism, theatricals, and royalty, Marrakesh lends a rose-tinted view of to a world apart from the high rise concrete realities of our life. Snow, sand, and greenery embody the past, present, and surroundings of this mystical city. Marrakesh is the ideal destination for adventure seekers and those looking to leave behind the hustle and bustle of a gray world to escape into pink, rosy hues.